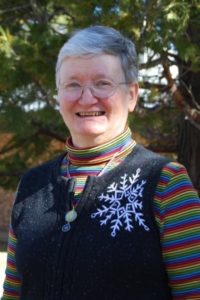 Sister Mary grew up in Boise, Idaho, where she was employed as a pharmacist after graduating from Idaho State University in 1970.

Before entering the Monastery in 1973, and afterward, she continued her work as a pharmacist. She also taught release time classes and served in various parishes as a youth minister, pastoral associate, DRE, and as retreat minister at the Monastery.

Her interest in monastic studies has guided much of her work, beginning with teaching Latin at the Center for Medieval Studies at the University of Toronto. She was a councilor for the Federation of St. Gertrude and the past president and board member of the American Benedictine Academy.

She was also an associate professor in Monastic Studies at the School of Theology, Saint John’s University in Collegeville, MN and taught at the College of St. Benedict. Her research has revealed that many forms of monastic life have been lived through the centuries, each responding to the events of the culture and society. “A truly inspiring surprise has been to discover that the earliest monasteries were frequently established by Christian women, following the example of Christ by establishing house churches and later household communities near major Christian centers in the Mediterranean region.” 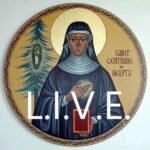 Who was Evagrius? Spiritual progress according to Evagrius, tripartite model of the soul, Evagrius’ schema of the eight generic thought, later development into the seven capital sins, how evil penetrates the heart, manifestation of one’s thoughts to a wise elder, elimination and combatting evil thoughts, and a contemporary example.   St. Gertrude’s L.I.V.E. (Living In a Virtual Environment) offers online programs to further opportunities for prayer, learning, community, and spiritual growth from a Benedictine perspective. We look forward to bringing St. Gertrude’s to you, wherever you are.

This presentation will address the ancient pre-Christian understanding of the golden rule (do to another what you would want done to you); the theology of the “silver rule” as it was known in the First (Old) Testament and the golden version in the New Testament; Benedict’s spirituality of compassion; and how we embrace compassion in our complicated and at times contentious world today.   St. Gertrude’s L.I.V.E. (Living In a Virtual Environment) offers online programs to further opportunities for prayer, learning, community, and spiritual growth from a Benedictine perspective. We look forward to bringing St. Gertrude’s to you, wherever you…